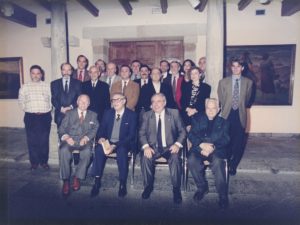 Some of the members of the group of jovellanistas enthusiasts on the day of the signing of adhesion to the founding act. Gijón, August 6, 1995.

In 1994, in Gijón (Asturias), took place the celebration of the Second Centenary of The Royal Institute of Navigation and Mineralogy’s creation, the same year than the 250th anniversary of Jovellanos birth.

For that reason, a small group of enthusiastic Jovellanists wanted to attempt to keep alive the flame that was started in Gijón and Asturias to the memory of the immortal Jovellanos. This group was led by a professor from the University of Oviedo, the greatest Jovellanist example of the 20th century, Mr. José Miguel Caso González.

It was projected then, with the Gijon Town Council’s support, the creation of a cultural association that would be called Jovellanos Forum.

A day full of Jovellanist evocations had to be found for the consolidation of the association: the 6th of August, anniversary of the most emotive and resounding welcoming that the sons and daughters of Gijón gave to their ‘paisano en vida’, after years of being away from his homeland and being unfairly imprisoned in Mallorca. 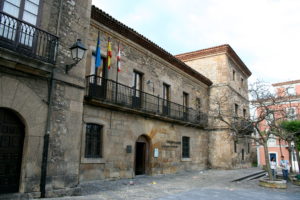 Since then, the town of Jovellanos has vibrated with his memory on that day. At twelve o’clock on the 6th of August morning in 1995, that group of enthusiastic people met as a Constituent Assembly in the old plot of land of the Jovellanos family, the nowadays Jovellanos Birthplace Museum. Thus was born the new association, which aim, according to Article 1 of its Statutes, was to keep alive the work and figure of Mr. Gaspar Melchor de Jovellanos. The association was duly enrolled in the Register of Associations of the Principality of Asturias, nº 4409, First Section, limited in virtue on the 17th of November, 1995.

And such was its juridical form until the Extraordinary General Meeting on the 12th of March, 1998. It was agreed then its transformation into a Non-profit Cultural Foundation.