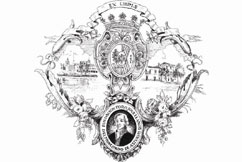 Exlibris of the Jovellanos Forum Foundation of the Principality of Asturias. By Jesús Gallego. Gijón. Asturias. Spain.

The Jovellanos Forum Foundation of the Principality of Asturias has a library collection about Jovellanos, his times and other contemporaneous characters.

A great part of the collection comes from a generous donation by Mr. Antonio Valdés y González Roldán. The donation was composed by several dozens of Jovellanos editions from the 18th, 19th and 20th centuries.

One of the other values more appreciated from the Jovellanos archive is the newspapers archive, which was exhaustively selected and organised. The archive contains several articles and journal news about Jovellanos, from the 19th century to nowadays.

With the aim that the spread of the works of and about Jovellanos will become a reality, it is pretended that the sections which form the Library Archive will be a part, in medium term, of a great selection and cataloguing project. This project has already started in order to provide information to Jovellanos researchers and scholars.

Furthermore, in this section will start to be included those titles which copyrights have generously been given by their authors, so they could be spread throughout this medium.

On the other hand, several works of Jovellanos are also included for being considered essential to completely know his thought.